My family were refugees 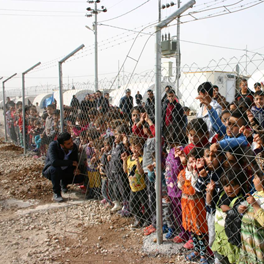 As a child, I heard the story that my grandparents had escaped the Pogroms in Ukraine in 1906, that they boarded a ship in Odessa and came to the UK as refugees.

Over the past weeks, the world has witnessed an exodus of desperate people fleeing; risking their lives at sea to make a better future and a new start ‘somewhere’ in Europe.

I can’t help but think about those who don’t have the means, money or strength to make that journey.  Whilst Europe is concerned about the thousands of refugees who are knocking on their doors, the Kurdish regional government has given asylum to 1.8m refugees in less than one year; distributed in dozens of camps in three provinces.  The conditions in those camps beggar belief. No shoes nor boots, no nappies, no soap, no water, and soon the heavy winter rains will flood and saturate the boiling sands which blistered and burnt the children’s feet this summer, at temperatures of 45 Celcius.  Six thousand children died from the bitter cold last winter 2014.

My colleague’s visit recently described the atmosphere of the camps. “Children are behind barbed wire to keep them safe from local ISIS kidnappings. Silence; total silence…. Thousands of families, with children and babies. No crying, no laughter, no sound. Just a hopeless silence from desperate people”.

We are proudly working with Dutch charity partners, and together we are delivering hope from donors in the UK and Europe -  warm knitted blankets and clothing, warm jackets, duvets, disability equipment, hygiene products, boots and shoes for the cold weather ahead.

The message they want us to relay to our donors and the rest of the world is: “Thank them and tell them our story”.